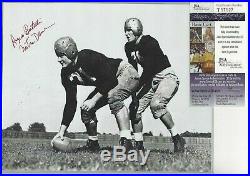 Note that items with COAs come with individual COAs, sticker usually on back of item. I do not accept "Best Offer". Prices are reduced every 30 days until the item sells. Thanks for understanding this policy! New items will be added the first of the month... Prices on existing items will be reduced at the end of each month. When Bertelli entered Notre Dame in 1940, he was 6 feet 1 inch and 173 pounds, a skinny but highly regarded tailback in the single-wing formation used by most college teams. When Coach Elmer Layden left to become commissioner of the National Football League, Notre Dame's new coach, Frank Leahy, immediately noticed Bertelli's passing talents. As a sophomore, Bertelli, still a single-wing tailback, led the nation with a 56.9 percent passing average, completing 70 of 123 attempts.

In 1942, Leahy switched to a modified T-formation, in which Bertelli would play under the center and take every snap. As he told his budding star, Bert, you're the finest passer and the worst runner I've ever coached. " That summer, preparing for his new role, Bertelli said he took "a thousand snaps... Bertelli and the T-formation were an immediate success. He passed for 1,039 yards and 10 touchdowns.

Celebrated sportswriter Grantland Rice referenced Bertelli as the T-formation magician. During his senior year in 1943, the Marine Corps activated Bertelli after six games of Notre Dame's 10-game season. In the six games Bertelli started in, he threw 36 passes, completing 25 with 10 touchdowns. Bertelli's six-game 1943 performance was enough to win the Heisman Trophy earning 648 votes.

Bertelli's collegiate career earned him multiple awards. He was named to the 1942 and 1943 All-American teams. In the Heisman voting for America's outstanding college football player, Bertelli finished second in 1941 and sixth in 1942 before capturing the trophy in 1943. Though on active duty with the Marine Corps, the Boston Yanks selected Bertelli as their number one draft choice in 1944.

Bertelli was later inducted to the College Football Hall of Fame in 1972. Additionally, I slip all autographed photos inside sturdy photo-protective sleeves. In most cases, using Jack Smalling's baseball address lists and other assorted address lists, I wrote to both active and retired baseball players, sending them letters, requests for signatures, and self-addressed-stamped envelopes.

This is how I obtained thousands of autographs. I stand by every item I sell. All the old time autograph dealers know me and the professional authenticators will vouch for my reputation as well. I do this on a part time basis, so sometimes emails take a day. PLEASE NOTE: Most items come with certificates of authenticity from outside companies (JSA and PSA predominantly; they are the best). Sincerely, Joe Binder , Downers Grove, Illinois.

The item "Angelo Bertelli Notre Dame Football Star Autographed 8x10 Photo JSA COA" is in sale since Thursday, August 1, 2019. This item is in the category "Sports Mem, Cards & Fan Shop\Autographs-Original\College-NCAA\Football\Photos". The seller is "calabinder" and is located in Downers Grove, Illinois.