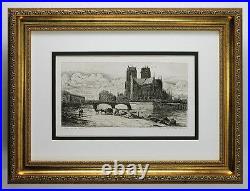 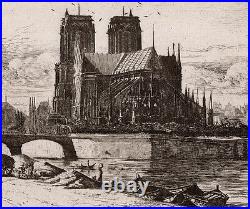 This piece has been professionally matted and framed using all new materials. This is not a modern print. This is an original Amand Durand print. This impression is more than 135 years old. The quality of the Durand etchings are so good that many museums and galleries have ended up with Durand etchings that are shown as 17th century originals.

View of Notre Dame Cathedral on the Île de la Cité from across the river Seine, the Pont aux Choux seen at left beyond boats, horses and figures. Charles Méryon was a French printmaker whose etchings romantically depicted the life and mood of mid-19th-century Paris. Included among Méryon's earliest works were drawings of the New Zealand coast that he executed while he was in the French navy. He subsequently employed these studies for etchings. Following his time in the navy, he entered the studio of Alexandre Bléry, who taught him the technique of etching, which, because of Méryon's colour blindness, became the medium at which he was the most talented.

He earned his living by doing hackwork, and for practice he made studies after Dutch etchers, such as Zeeman (Reinier Nooms) and Adriaan van de Velde. He then began the series Etchings of Paris, executed from 1850 to 1854; although Méryon always considered these plates as a set, they were never published as such. Besides these 22 etchings, Méryon produced about 70 others. Although Méryon is considered a great master of etching, striking in his originality and modernity, he was appreciated by only a few contemporary artists and critics. His life was one of great disappointments and terrible hardships; he became subject to hallucinations, and, shortly after the completion of the Paris series, he was committed to the Charenton mental institution at Saint-Maurice.

Méryon's rendering of architecture is often visionary, and generally his figures are incidental, like those of a landscape painter. But sometimes, as in his The Morgue (1854), they tell a story or, as in La Rue des Mauvais-Garçons (1854), with the two women secretly conversing, at least suggest a narrative. The Apse of Notre Dame (1853-54), considered to be Méryon's masterpiece, characterizes his great sensitivity to the effects of light and atmosphere.

Accompanied by a Certificate of Authenticity and is Fully Guaranteed to be Certified as Described. Any framing included in a listing is double matted and framed in a solid wood moulding.

We can also frame any pieces not listed as such. We are usually half the price of a regular framer. We guarantee all our listings to be 100% as described. This item is in the category "Art\Art Prints". The seller is "themadhattercollection" and is located in this country: US. This item can be shipped worldwide.